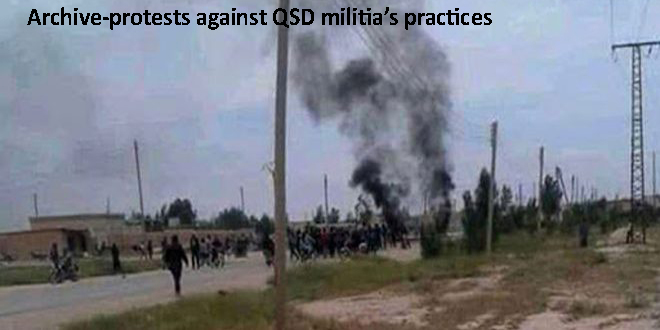 Hasaka, SANA- For the eighth day in a row, the primary and al-Baath bakeries in the cities of Hasaka and Qamishli are suspended from operation in light of siege imposed by US-linked QSD militia on neighborhoods in the city.

“The bakery has been stopped from working for the eighth day, since the so-called QSD-linked Asayish has taken over the bakery after a siege that lasted four days, as well they have prevented workers from operating the bakery,” director of al-Baath bakery in Qamishli, Sattam al-Mahmoud, told SANA.

Al-Mahmoud added that the militia has also prevented delivering the flour to the bakery workers from warehouses to compensate for the interruption of supplies.

The reporter said that there is a huge shortage of bread in the cities of Hasaka and Qamishli, a matter that increases the suffering of citizens who demanded the international organizations and humanitarian agencies concerned to intervene quickly and stop the acts of QSD militia.