A major railway project being implemented in Hassia industrial city

Homs, SANA- The branch of the General Establishment for Railways in Homs, in cooperation with the Railway Construction Company, continues to implement the technical works to complete the 12 km long line linking the new Khneifis station with the industrial city of Hassia and linking it with the Syrian railway network.

Director of Railway Establishment- Homs Branch, Mohsen Mahmoud told SANA that the new station will benefit the industrialists and the percentage of execution of the project exceeds 90 percent.

Mahmoud added that the rate of execution in the dry port exceeded 85 percent, shedding light on the important economic impact of this project in reducing the costs of producing goods and accelerating their export.

In turn, Director of Industrial City Railway Projects Adeeb Shaheen revealed that the container yard has an area of 58,000 square meters. 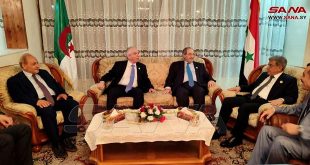 Meeting Syrian community in Algeria, Mikdad affirms that all foreign pressures on Syria will be foiled

Algiers, SANA- Foreign and Expatriates Minister, Dr. Fayssal Mikdad, has affirmed that the enemies of …