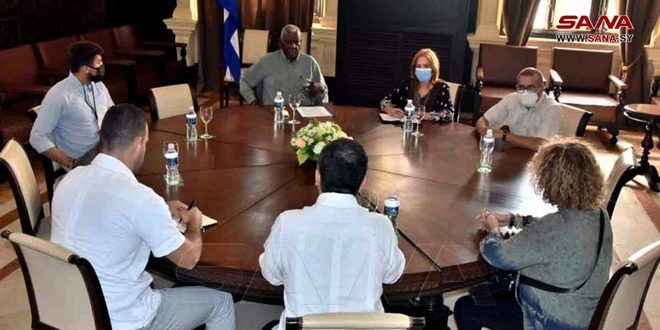 Havana, SANA- President of the National Assembly of People’s Power of the Republic of Cuba, Esteban Lazo, has reiterated his country’s support for Syria at all regional and international parliamentary forums, describing the relations between the two countries as distinguished and deeply rooted.

Lazo’s remarks came during a meeting with Syria’s Ambassador to Cuba Dr. Idris Mayya at the Assembly headquarters in the Cuban capital, Havana. He shed light on the importance of parliamentary relations in strengthening official and popular relations between the two countries.

He highly appreciated the efforts made by Ambassador Mayya, who will soon finish his duties, in strengthening relations and consolidating the ties of friendship between Syria and Cuba.

For his part, Ambassador Mayya expressed thanks and gratitude to Cuba for its appreciation of the Syrian leadership and people which he felt during his work there.

Mayya stressed that Syria will always stand by Cuba’s side at the regional and international forums and support its struggle to put an end to the unjust siege imposed on it by the US for more than more than six decades.