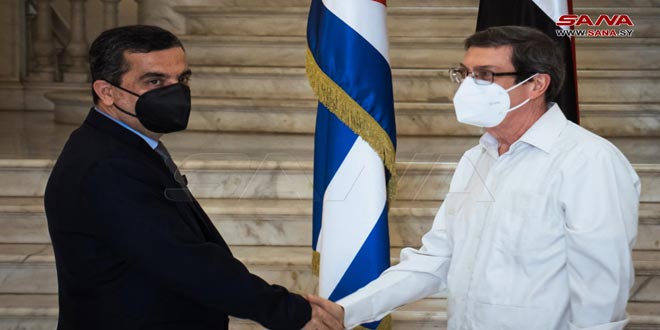 Havana, SANA- The Republic of Cuba awarded the Syrian Ambassador in Havana, Idris Mayya, with the Friendship medal in appreciation for his great contribution to strengthening and consolidating the historical ties of friendship and solidarity between both countries.

Cuban Foreign Minister, Bruno Rodriguez Parrilla, awarded Mr. Mayya the Friendship medal during a ceremony held at the Ministry’s headquarters in Havana. The Medal was awarded in accordance with a presidential decree issued by President Miguel Diaz- Canel. During the ceremony, Cuban Deputy Foreign Minister, Annoyance Rodriguez, reiterated her country’s stance in support for Syria, especially in the face of hostile US policies.

She hailed Syria’s firm stance against unilateral coercive measures and the economic, financial and trade embargo imposed by US on Cuba for more than 60 years.

In turn, Ambassador Mayya expressed his gratitude for this honor, stressing Syria’s stance that backs Cuba and its resilience against the unjust embargo imposed on it by the US.