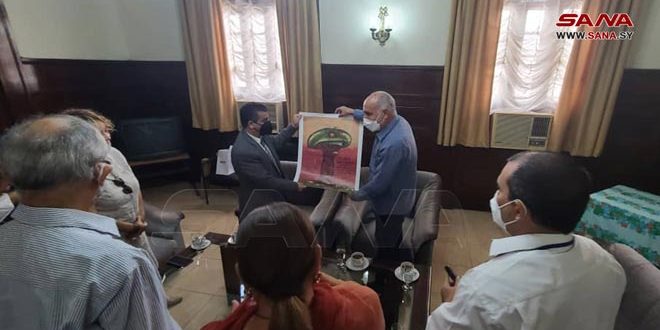 Havana, SANA-Several Cuban journalists praised the important role of the Syrian national media in defense of their country, and expressed their continued support for Syria in the face of the hostile media campaign launched against it.
During a farewell ceremony for Syria’s Ambassador to Cuba Idris Mayya, on the occasion of the end of his mission, held at the Union of Cuban Journalists in Havana, President of the aforementioned Union, Ricardo Ronquillo, highlighted the constructive and permanent cooperation between the two journalists’ unions in Syria and Cuba to serve the common causes defended by both countries.

Ronquillo expressed his condemnation of the biased media campaign against the two countries by hostile media.

“The Cuban media will always stand by the Syrian media and will do the best to uncover hostile imperialist policies” He added.

For his part, Ambassador Mayya expressed his gratitude to the Cuban media for their constructive role in defending the truth and their firmness in conveying the facts as they are and in revealing the crimes of terrorist organizations and their supporters.