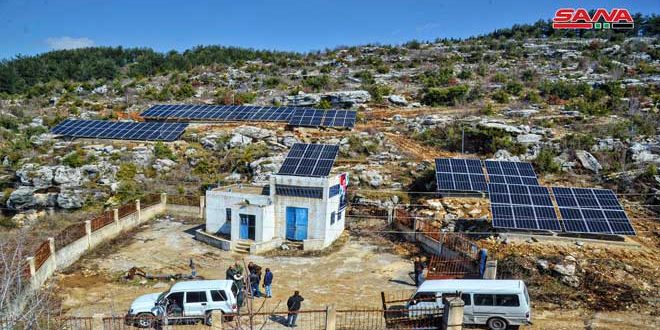 Lattakia, SANA- Implementation of the solar system to operate the pumping station of al-Sneibleh well in Jableh countryside alleviated a lot of the people’s suffering from having drinking water. The station feeds 5 villages in Jableh countryside. Mayor of the town of Harf al-Musaytirah, Asa’ad Muhammad Khasrov stressed in a statement to SANA reporter that the idea of alternative energy projects is good, especially in villages far from the power lines to solve the water problem and alleviate the thirst crisis there.

Director General of the Public Corporation for Drinking Water and Sanitation in Lattakia, Tariq Ismail said that the corporation’s efforts fall within the framework of activating the culture of alternative energies, and the aim of the plan in remote areas is to alleviate the suffering of the people , which was exacerbated by the status of electrical rationing.