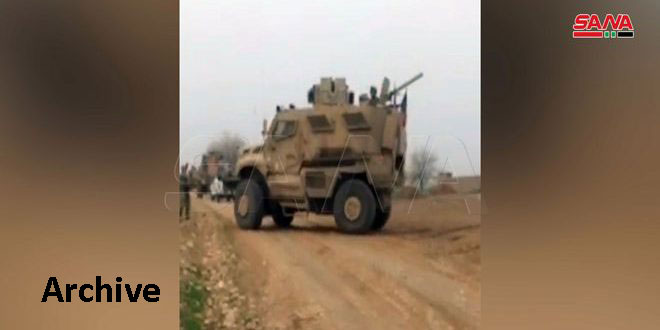 Qamishli, SANA- Two villages in Qamishli countryside supported by a unit of the Syrian Arab Army, confronted a convoy of military vehicles of the US occupation forces and expelled it from the area.

Local sources told SANA’s reporter that a convoy of the US occupation, consisting of six military vehicles, tried to cross into Tamneh Rahyat village via the checkpoint of Rahyat al-Souda village in Qamishli southern countryside.

The locals of the two villages confronted the convoy and expelled it from the vicinity of the villages after throwing stones at it, and chanted slogans condemning the US occupation of parts in Syria.

Qamishli countryside Syrian Arab Army US military convoy 2022-03-18
shazaa
Share
Previous Syria’s Permanent Representative to the United Nations in Geneva Hussam Eddin Ala affirms during a session of the Human Rights Council that Syria renews its rejection of the mandate of the Commission of Inquiry and its false reports, and calls for ending this politicized mandate
Next Ala: UNHRC must replace approach of confrontation and polarization with dialogue and cooperation