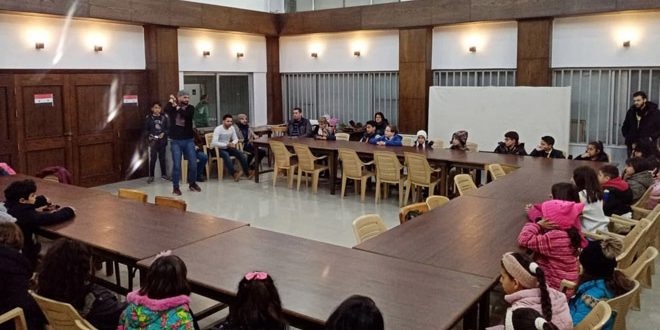 Tartous, SANA- Activities of the ” we play and learn festivity” held by Tartous Directorate of Culture focused  on teaching children and adolescents the nature of cinema, the nature of the seventh art and its components . The activity, which was held under the motto ” The Small Cinematic” was attended by children between the ages of 12 and 18.

The chidlren received cinematic training courses, in addition to practical rehearsals given by director al-Muhannad Kalthoum.

Film director  Kalthoum told SANA  in a statement  that this initiative, which was launched from  Damascus city to contribute to building a new cinematic generation, aims to teach children and young people what cinema is and transfer cinematic thoughts to this generation to learn how to make their own films and deal with the camera.

He pointed out to the fact that there are a number of talented children who can  benefit from this project.