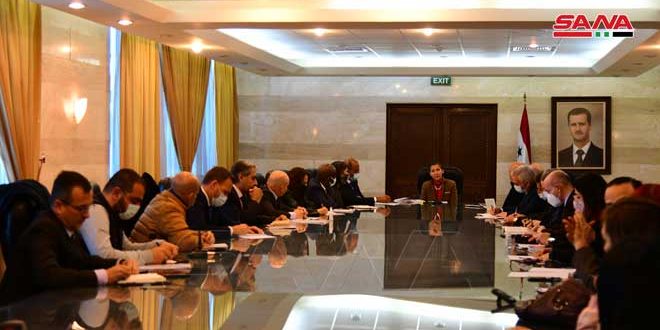 The meeting, which was held at the Ministry’s HQ on Monday, addressed the dangerous and emergency situation in Hasaka city as a result of the attack carried out by armed terrorist groups of Daesh(ISIS) and QSD militia, and US occupation forces.

The Ministry indicated, in a statement of which SANA received a copy that the attack in Hasaka left martyrs and wounded, mainly children, and caused great damage to the province’s infrastructure, which led to the displacement of thousands of Syrian families towards the state – controlled areas in search of safety and protection.

During the meeting, the Director of the International Organizations Department at the Ministry has informed representatives of those organizations, mainly the UN ones to take all the necessary measures to provide the required assistance to civilians and address the consequences of this emergency humanitarian catastrophe in light of the harsh weather conditions suffered by thousands of displaced Syrian families fleeing terrorism and the practices of the US occupation forces, QSD and Deash.

The main factor that aggravated the humanitarian needs there is the imposition of Western unilateral coercive measures on Syria and its people, was also stressed.