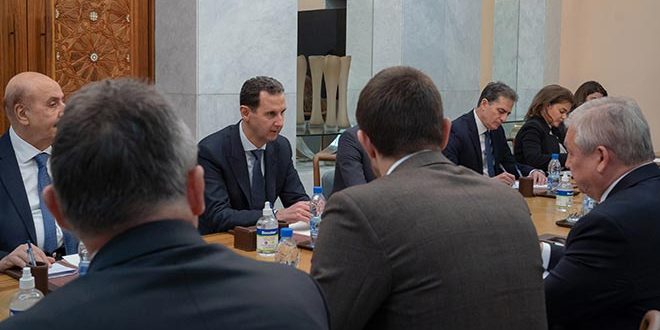 Talks during the meeting dealt with the latest regional and international developments and political issues of mutual concern.

President al-Assad considered that western pressures to which Russia is exposed- in a number of files- come in reaction to the Russian active and important role on the international arena and its defense for the international law, its stances in the face of the immoral polices adopted by some western states and the attempts of these states to create chaos in order to control other countries and the will of their people.

Discussions also tackled aspects of bilateral cooperation and the positive outcomes of this cooperation in the victories being achieved against terrorism, in addition to the return of security and stability to the majority of Syrian lands.

Lavreniev, for his part, conveyed President Putin’s greetings to President al-Assad and the Syrian people, affirming that Federal Russia gives special interest to develop relation with Syria and boost cooperation between institutions of both sides.

The Russian official also said his country supports the Syrian people to overcome the impacts of war, expressing Russia’s satisfaction over indicators that point to Syria’s return to play its important role in the Arab region, which was an outcome of Syria’s victories and the will of its people.

President al-Assad appreciated the efforts exerted by President Putin and officials in Federal Russia at all levels to develop relations between both countries and support the Syrian people in the war on terrorism.