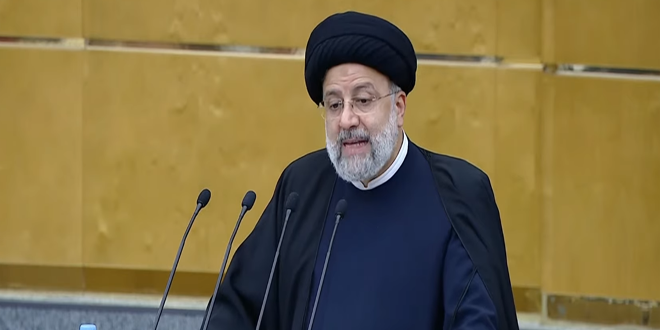 Tehran, SANA- The joint efforts of Iran and Russia and their support for Syria in its war on terrorism have been fruitful thanks to the steadfastness of the Syrian people, Iranian President Ebrahim Raisi affirmed.

In a speech at the Russian State Duma on Thursday, President Raisi added that terrorism is a result of hegemony whose strategy has failed.

Raisi noted that cooperation between Tehran and Moscow will enhance security in the region, after this cooperation had enabled Syria to overcome terrorism on its territory.

He added that the policies of the United States aim to weaken independent countries by destabilizing them and imposing economic embargo measures, which represent a form of hegemony whose strategy has failed.

Raisi stressed that Iran is seeking to develop its relations with Russia on a firm basis without allowing the interference of other parties, indicating that the agreements inked between the two countries will further boost bilateral relations on the economic and trade levels.

He reiterated that Iran will continue to work to lift the unjust Western sanctions imposed on it and protect the rights of its people.

Regarding the North Atlantic Treaty Organization (NATO), Raisi indicated that its current practices will lead to its collapse as it storms the territories of other countries under the pretext of defense, but they threaten the security and safety of those countries and undermine true democracy.