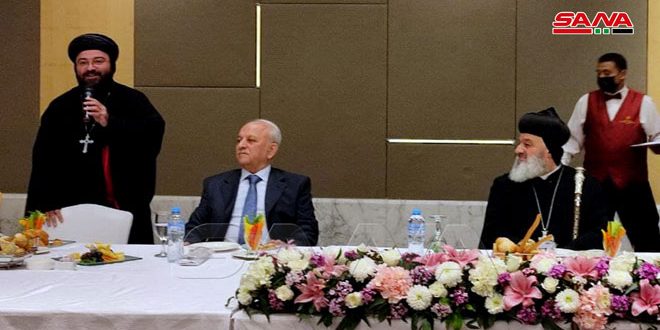 Cairo, SANA- Mor Ignatius Aphrem II, Syriac Orthodox Patriarch of Antioch and Supreme Head of the Universal Syriac Orthodox Church, expressed hope that the friendly countries would stand by Syria to lift and end the coercive economic measures imposed by the West on its people.

The Patriarch’s remarks came during a meeting in Cairo yesterday evening with the parishioners of the church and the members of the Syrian community in Egypt on the occasion of Christmas and the New Year.

“We pray and hope that the reconstruction will be done completely. Unfortunately, we are victims of those who speak in the name of democracy, but their intentions are different. They are the ones who allowed the imposition of intolerable sanctions. We hope that friendly countries will stand with us to lift those unjust sanctions and that things will be better,” Patriarch Aphrem II said.

He affirmed the adherence to the unity of Syria politically, geographically and socially.

Patriarch Aphrem II added that Syria is recovering day after day and is waiting for its citizens to contribute to the reconstruction process after the global war that killed people and did not differentiate between a mosque and a church.”

For his part, Dr. Bassam Darwish, Chargé d’affaires of the Syrian Embassy in Cairo, praised the remarkable successes achieved by the Syrians in Egypt and other countries.

He highlighted the importance of the industrialists’ return to their country and their contribution to the reconstruction in it.