US occupation and QSD militia kill two civilians, abduct others in Deir-Ezzor countryside 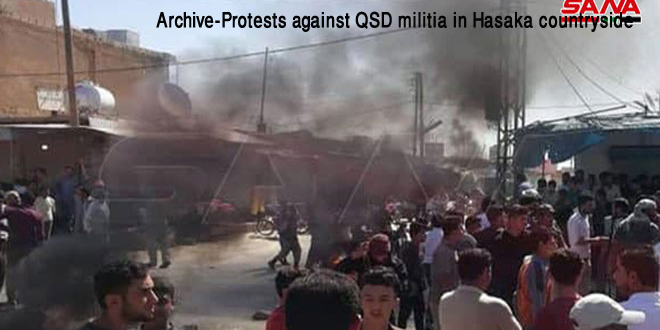 Deir,Ezzor, SANA – QSD armed groups, backed by US occupation helicopters, stormed into al-Sabha town and Fneinjn village in Deir-Ezzor countryside under heavy shooting, killing two civilians and kidnapping many others, among them a woman .

Local sources told SANA that the US helicopters carried out an airdrop on the outskirts of Al-Sabha  town  in the eastern countryside of Deir-Ezzor while armed groups from QSD militia supported them on the ground, kidnapping three civilians, including a woman from one family.

The sources added that other armed groups cordoned the village of Fneijin in Abu Khashab region and stormed into the area under heavy shooting.

The US occupation forces repeatedly carry out similar airdrops to remove their agents of Daesh terrorists.