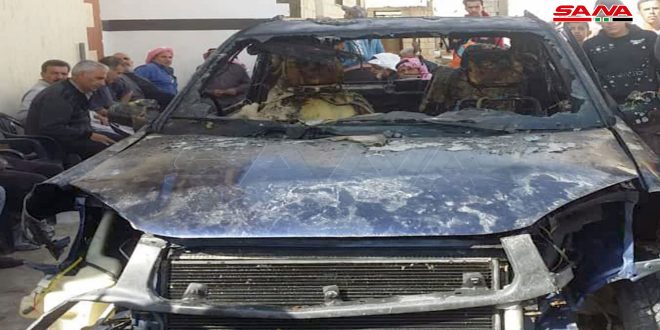 Quneitra, SANA- Terrorists have detonated an explosive device in a car parked in front of its owner’s house in al-Qusaybah village, Quneitra southern countryside, as the car was damaged without causing any casualties.

An explosive device planted by terrorists in the car of a member of the Reconciliation Committee in Quneitra, Abdullah al-Shraideh, exploded this morning in front of his house in al-Qusaybah village, which led to its destruction and material damage to the place, local sources told SANA reporter.

The sources affirmed that there were no civilian casualties, pointing out that this is the fourth attempt to assassinate al-Shraideh by terrorists as part of their attempts to impede the efforts of peaceful solutions proposed by the state to spread peace and safety across the province.