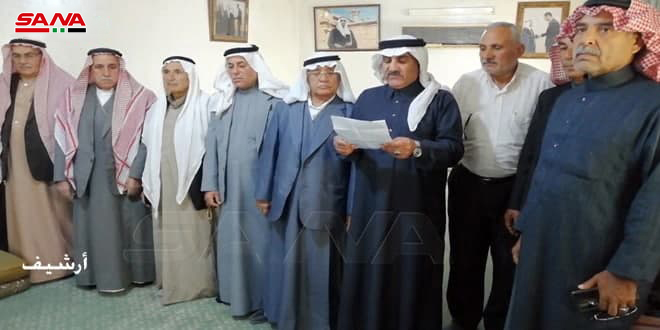 Hasaka, SANA- Syrian Tribes and Clans in Hasaka province condemned the US occupation-linked QSD militia’s blatant aggressions as a “violation of all ethical and humanitarian standards” through exploiting the support of the US occupier  to attack the locals of the region, and infringe on the public properties and use military force against them.

The Arab clans condemned, in a statement to SANA, the flagrant, non-ethical, and unacceptable use of military force against the locals who confronted the terrorists’ attempts to infringe on the public properties in the villages affiliated to Tal Barak district in Hasaka northern countryside.

They expressed support to the locals in Tal Barak area in facing those who tried to attack the public properties, asserting that preserving them is considered as “a national and ethical duty.”

The statement stressed that the choice of popular resistance is the only way to preserve the dignity of the homeland and its honorable citizens.

The US-backed QSD militia opened fire on the unarmed locals in the villages affiliated to Tal Barak area in Hasaka northern countryside while they were attempting to prevent the gunmen of the militia from stealing the electric transformer which feeds the villages and residential blocks in the area, causing the martyrdom of a civilian and the injury of 16 others.