Syrian and Russian Coordination bodies: illegitimate US presence in Syria is the main obstacle to returning to normal life in the country 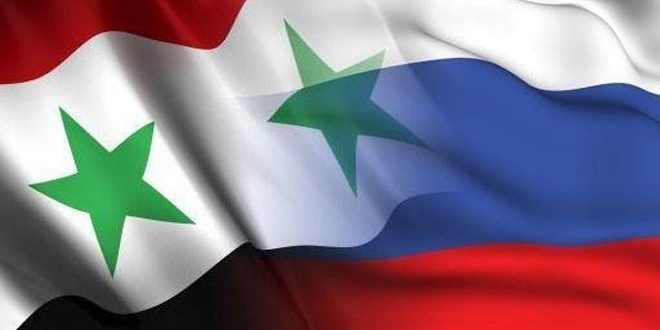 Damascus, SANA- Syrian and Russian Coordination bodies said that the Syrian government continues to make efforts to create the adequate conditions for the return of citizens to their homes, affirming that the illegitimate presence of the US and its allies in Syria is the main obstacle to returning to normal life in the country.

In a statement on Sunday, the two bodies noted that they are working for the voluntary return of the Syrian citizens to their home and restoration of the normal life in the country.

They indicated that thanks to the joint efforts ,two million, 306 thousand and 584 Syrians have returned to their places of residence so far.

The statement added that the Syrian government continues to make efforts to create the adequate conditions for the return of citizens to their homes through improving health and education services, rehabilitating infrastructure, and solving humanitarian problems which affected all region of the country, in addition to creating new job opportunities for the returning Syrians.

” We draw the attention of the international community to the report of United Nations High Commissioner for Refugees “UNHCR” that indicates a considerable decline in the living standards of the Syrian refugees in the Middle East region as 60 percent of Syrians lost their jobs outsides their countries, which increase the probability of their involvement in extremist, and terrorist groups in lands outside the control of Syrian government,” the statement added.

The statement described the US accusations to the Syrian state as the height of hypocrisy where the US continues to impose illegal economic sanctions which hinder the reconstruction of infrastructure and also prevent the access of medical equipment and medicines necessary for addressing Corona epidemic.

The two bodies called on the international community not to abandon its obligations, and provide the appropriate support to the UN, in implementation of the UN Security Council Resolution no. 2585 to develop reconstruction projects in Syria and improve public facilities.

The statement indicated that the illegal presence of US of America and its allies in Syria is the basic obstacle to returning to normal life in the country through plundering the natural resources in the country and igniting tension in the region.