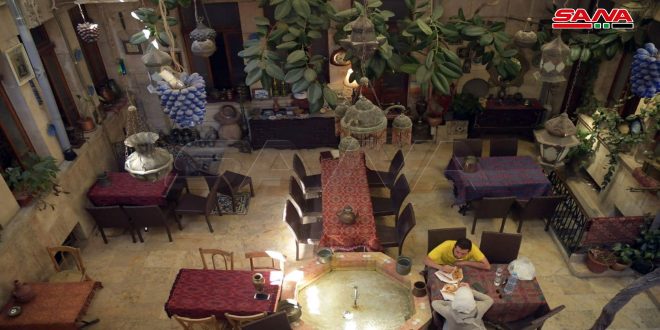 Aleppo, SANA- “Dar Halabia” is located in al-Jalloum neighborhood between the ancient alleys near Bab Antakiya in Aleppo. It is an old Arab house which was turned by tourist guide, Abdel Hay Kaddour, into a charming heritage hotel since 2000 with its simple details and quiet atmosphere mixed with the smell of the past. Three years ago, the hotel became a small café with its charming and heritage atmosphere. Tourist guide Kaddour told SANA reporter that “The return to heritage and adherence to it in addition to the beauty of the old houses of Aleppo, made me determined to revive the old Aleppo House,” noting to the importance of reviving the heritage houses and investing them in various tourist and cultural fields.

He added that since 2000 “I decided to transform this house into a traditional hotel that attracts tourists, filled with charming details of the fountain, wooden decorations, traditional tools, copperplates, windmill, water vault and other materials that provide tourists calmness to spend a special time within a unique heritage atmosphere.

Dar Halabia Hotel consists of 16 rooms whose doors are closed now in light of the terrorist war on Syria, so that the hotel was transformed into a small cafe with a simple atmosphere.