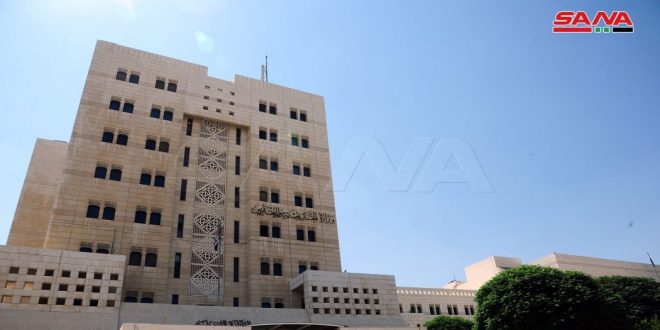 Damascus, SANA – Syria once again demands that the UN Security Council and the United Nations Secretariat to assume their responsibilities in the framework of the UN Charter , condemn the Israeli attacks on the Syrian territories and take firm and immediate measures to prevent their repetition.

“In the framework of the Israeli occupation authorities’ continuation of their policies and terrorist crimes against the sovereignty of the countries in the region, and their continued violation of Security Council resolutions related to the crisis in Syria, at 1:26 a.m. on Friday dawn of the 3rd of September ,the Israeli enemy carried out an air aggression on the Syrian lands from the direction of the south eastern side of Beirut, targeting the surroundings of Damascus,” Foreign and Expatriates Ministry said in a letter addressed to UN secretary General and President of Security council.

The Ministry added that Syria holds the Israeli entity accountable for these crimes, affirming that the repeated Israeli attacks will not bend the Syrian government from fulfilling its constitutional duty to continue the fight against the terrorist organizations.

The Ministry went on to say that the Syrian Arab Republic, as a founding member of the UN, demands once again the UNSC and the UN Secretariat to assume their responsibilities in the framework of the Charter of the UN, the most important of which is maintaining international peace and security, condemning and stopping the blatant Israeli attacks, holding it accountable for these attacks, and taking firm and immediate measures to prevent their recurrence.

Syria also demands to force the Israeli entity to respect all the United Nations resolutions and to be held accountable for its terrorism and crimes against Syria, Palestine and Lebanon, the Ministry concluded its letter.

Damascus, SANA-“the beginning” short movie presents a narration about the terrorist war on Syria from …