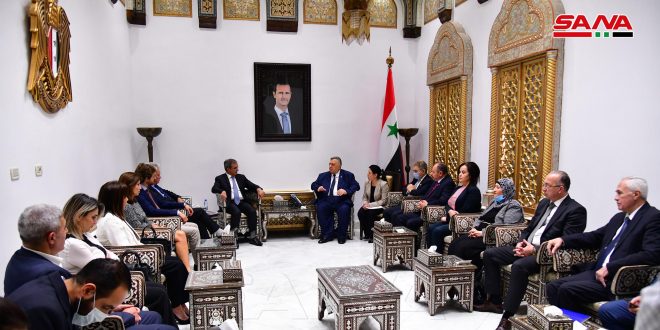 Damascus , SANA- Speaker of People’s Assembly ,Hammouda Sabbagh , stressed that the coercive unilateral economic measures imposed on the Syrians are considered as a blatant violation to the International Law and the Human Rights conventions, calling for lifting these measures completely.

Sabbagh, meeting member of the European Parliament, Thierry Mariani ,and an accompanying delegation, voiced appreciation of Mariani’s stances in support of the Syrian issues , affirming the importance of conveying what the Syrians have been facing of suffering and pains to the public opinion in France and Europe, especially in terms of the medical sector due to preventing importing the medical materials and equipment to hospitals in Syria.

Speaker Sabbagh said that some states exploit the file of Syrian refugees as a pressure card against the Syrian State and try to blackmail the International Community with it under flimsy human Rights claims.

For his part, Mariani said that the delegation is on a visit to Syria right now to inspect the reality of events of what the Syrians have being exposed to after the repercussions resulted from the sanctions imposed on them , asserting the necessity of changing the European stance and the points of view.

He added that the European Union has to be grateful as Syria remained united, hailing the sacrifices offered by the Syrian Arab Army in defense of Syria and liberating its territories and protecting civilians.

In a press statement, the EU MP described the sanctions imposed on the Syrians as illegal and against the humanity , saying that the Syrians have being hurt from these sanctions and when the European Parliament resumes its work, “we will raise the issue of ending them especially those related to the medical sector,” clarifying that this visit represents an opportunity to offer support and solidarity with the Syrian people.