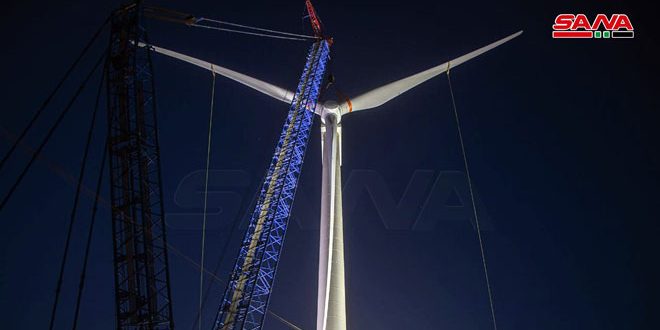 Homs, SANA- WDRVM company for alternative energy and heavy industries in Hassia Industrial city, Homs countryside has announced that Syrian cadres have been able to install the second wind turbine for generating electric power in Syria.

The company, in a press statement, said that the manufacturing and installation have been completely carried out at WDRVM company for alternative energy and heavy industries, in addition to the installation of the wind turbine in al-Dahabiyeh area, Homs western countryside on Homs-Tartous highway.

It noted that the turbine will feed the general power network in Syria with a capacity of 2,5 megawatts, so the full capacity with the first wind turbine will become 5 megawatts.

In spite of all harsh circumstances, the unilateral coercive measures and the economic siege imposed on the Syrian people, the company has been able to complete manufacturing the turbine with all of its components, including the tower, the blades and the remote-controls with high accuracy that is similar to the international standards, in addition to installing it on the lands of al-Sindyana village in al-Dahabiyeh area, west of Homs on Homs-Tartous highway.