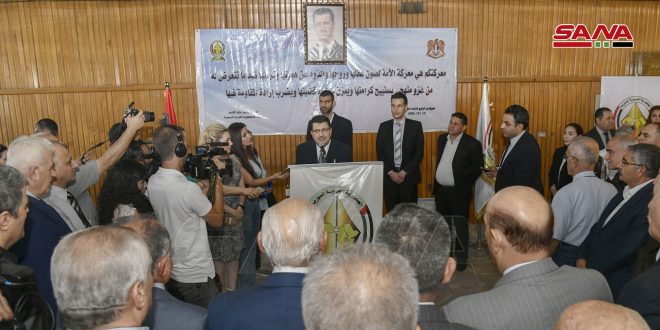 Damascus, SANA- On the occasion of the Syrian Press Day, the Journalists Union held a reception ceremony on Sunday in the building of al-Wahda Foundation for Press, Printing and Publishing in Damascus in presence of several journalists from different media institutions in Syria.

Delivering a speech, Minister of Information, Dr. Boutros al-Hallaq, said that the next phase is for the work and the production, noting that the media has a major role at this phase and the media professionals will do their role in support of construction and building, as they did in phase of restoring security and stability before.

For his part, Chairman of the Syrian Journalists Union Moussa Abdul Nour said that the journalists in Syria have performed their national and professional duty so they have been defending the unity of the Syrian soil against the injustice war in which the country has been undergoing.