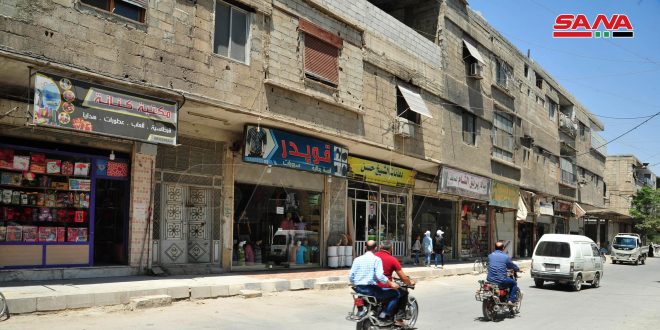 The shops of clothes, vegetables, fruit, electronics , and house’s instruments ,libraries , fast food restaurants and others are witnessing a  return to  their activity which helped  the city’s revival in which more than 55,000  of the city’s population are residing in it , head of local counci, Rateb Shahrour  told SANA reporter .

Shahrour said that after the city had been liberated from terrorist organizations, the city’s local council worked with the civil society and economic actors to encourage  people of Arbin to return to the city and begin rehabilitation their houses , shops and workshops , noting that nearly 17,000 people remained steadfast and did not leave the city .

The return of people along with a lot of factories to production attracted a lot of workforce, he noted , adding that the work is underway to  rehabilitate the infrastructures which has been completely destroyed, including sewage lines, water ,electricity and telephone networks , and service institutions, and this promoted the economic movement and the city’s markets .

During a tour in the markets, a number of shops owners and citizens expressed their happiness over the return of life in the city and opening the markets.

“I did not leave Arbin during the period of war and the economic movement is good and is improving after liberating the city,” said Amer al-Masri ,  A dealer of spare parts and accessories for bicycles and motorbikes.

For his part,  Zuhair Abdel-Hadi , a contractor, said that the city began to revive after its  liberation  from terrorism as  it improved 90% with the return of most state establishments to work, especially schools and the municipal council.