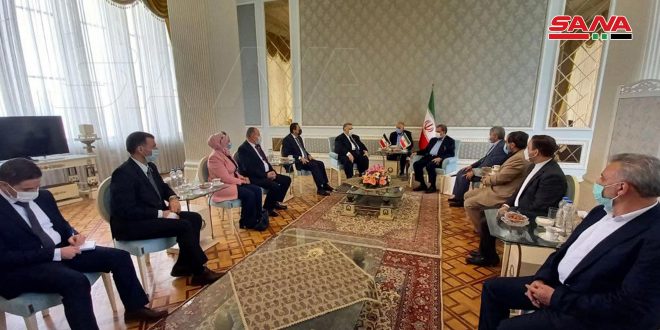 Tehran, SANA- Speaker of Peoples’ Assembly, Hammodah Sabbagh has affirmed the deep-rooted strategic relations between Syria and Iran, underlining the necessity of enhancing these relations in various fields, especially the economic and trade ones and promoting them to the level of distinguished political relations between both countries.

During a meeting with Secretary of the Expediency Discernment Council, Mohsen Rezaei, in Tehran on Wednesday, Sabbagh hailed the Syrian-Iranian cooperation in combating terrorism, saying that “having the Iranian and Syrian blood mixed in the course of fighting terrorists on the Syrian ground helped to achieve victories over this phenomenon which poses a threat to the whole world”.

He called for unifying the Syrian-Iranian joint efforts and activating cooperation between the two sides in serving the interests of the two friendly countries and peoples.

Sabbagh indicted to the doubled standards policy persuaded by the US and West towards Syria, as the US deals with our issues from the Zionist perspective and standard, in serving the interests of the occupation entity in the region.

In turn, Rezaei has stressed that Syria and Iran have combated terrorism and Takfiri groups on behalf of the whole world, appreciating the victories that Syria has achieved over terrorism under its leadership, people and army.

He expressed Iran’s keenness to enhance cooperation with Syria in different fields, describing the Syrian Iranian relations as solid and deep-rooted and that the two countries will stay side by side on all levels.