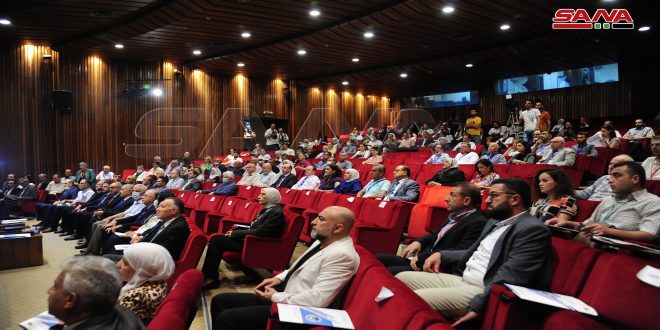 Damascus, SANA- Activities of the scientific agenda of the Syrian Expatriate Researchers Conference 2021, organized by Higher Commission for Scientific Research, under the motto “Towards Economy of knowledge” were launched on Tuesday at al-Assad National Library in Damascus.

The sessions of the conference will focus on role of Syrian researchers in the Homeland and abroad through presenting several researches in biotechnology, information technology, intelligent systems and nanotechnology.

Researchers from Damascus and other provinces will participate in the conference which will be accompanied by an exhibition for scientific posters. The conference, in its 3rd edition this year, has turned into an annual scientific forum that aims at benefiting from the experiences of the countries which have overcome and got out of their crises, in addition to possessing science, knowledge and technology as an essential pillar in their steadfastness and preserving their pride and dignity, Director of the Higher Commission for Scientific Research Majed al-Jamali told SANA reporter in a statement.

Al-Jamali pointed out that conference aims to achieve scientific research partnerships, as it is considered as a meeting point between ideas presented by researchers, pointing out that expatriate researchers from 17 countries participate in the conference.

The activates of the scientific agenda of the conference will continue until July 29th.