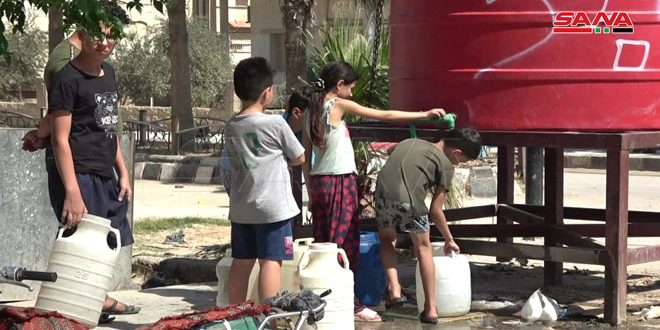 Hasaka, SANA- Turkish occupation and its terrorist mercenaries continue their crime of cutting off water of Allouk station, the main source of drinking water for one million citizens in Hasaka, while emergency measures of the governmental bodies and humanitarian organizations continue to secure temporary sources of water for citizens in Hasaka and its countryside.

With the rise of temperatures, the suffering of the citizens is taking an ascending curve, in light of the Turkish regime persistence in its crime of cutting water to the citizens of the city of Hasaka and dozens of villages and residential complexes in the countryside of the province.

In a statement to SANA, locals of Hasaka demanded to find a solution to the problem of water cuts, calling for intensifying efforts to shed the light on the crime of the Turkish occupation against one million citizens.

In a similar statement, director of the Water corporation, Eng. Mahmoud al-Okla, indicated that the Turkish occupier insists on investing the station in its criminal projects in the region, calling on all humanitarian and relief organizations and all parties to find a solution to the problem of Allouk water station and to keep the occupier away from it.

Okla added that the local bodies are currently cooperating with all parties, organizations and associations to secure and transport drinking water to the citizens, from the Naffasha wells station, east of the city, and from the Tel Brak station.

It is noteworthy that the Turkish occupation and its mercenaries of terrorist organizations are repeating their crimes by attacking the power lines feeding the Allouk water station, as they have recently transferred most of the electric power allocated to feed the station to their locations and headquarters in the occupied city of Ras al-Ayn.