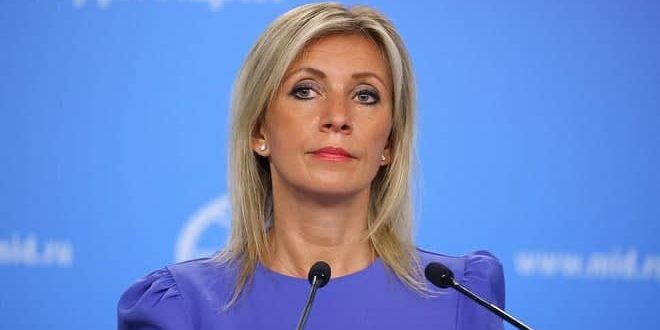 Moscow, SANA- Russian Foreign Ministry Spokeswoman, Maria Zakharova, affirmed that the West has made up the story of the chemical weapons and it maliciously uses it against Syria and Russia as “an appropriate pretext”.

“Moscow believes that the contradictions in the draft report of OPCW with Alexei Navalny on the situation in Syria is a malicious and systematic falsification by the West”, Zakharova said in a statement to Russia-1 TV.channel on Sunday, adding that this is not only a falsification but a series of fake information to form the opportunistic agenda needed for the West states.

“We have no doubt that the status concerned in the draft is not a fault, but a malicious act “the spokeswoman went on to say.

She pointed out that there is a large number of such mistakes over years and when these faults line up behind each other, they become an approach, referring that the US –French- British aggression on Syria was launched under the pretext of existence of chemical weapon and accusating the Syrian government of using it in Douma”.

Zakharova regretted over the West inability to change itself as it thinks that it has to change others, first and foremost the international law as it hinders its schemes.