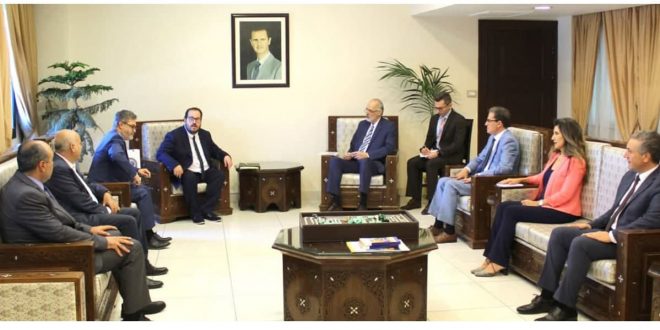 Damascus, SANA– Deputy Foreign and Expatriates Minister Bashar al–Jaafari received on Tuesday director of the Centre for Arabic and Islamic Studies of Institute of Oriental Studies of Russian Academy of Science, the Associate Professor of a number of Russian and international forums, Vasily Kuznetsov and the accompanying delegation.

Talks during the meeting dealt with means of strengthening the academic relations between the Russian Institute of Oriental Studies and the institutes for researches and intellectual and political studies in Syria with the aim of exchanging dialogue and reaching deeper understanding of the Syrian foreign and internal policy.

Al-Jaafari expressed the Foreign and Expatriates Ministry’s readiness to deepening cooperation in the frame of exchanging dialogue and expertise between the Syrian researchers and the Russian experts and researchers in the Russian Institute.

He pointed out to the pivotal role of the institute since its foundation in drawing the Soviet then the Russian foreign policy and in the understanding of the cultural dimension between the Soviet Union and Russian and the Arab Countries as considered a reserve for diplomatic work.

He briefed the Russian delegation on the features of the Syrian diplomacy which based on the international law and the principles, but not on interests, noting, in this regard, to Syria’s principled stances towards a number of countries that face unilateral sanctions and unfair siege imposed on them which contradicts with the international law.

Al-Jaafari expressed optimism regarding the return of the Arab relations with Syria, asserting that the Arab nationalist intellect is deeply rooted in Syria’s relations with the Arab countries.