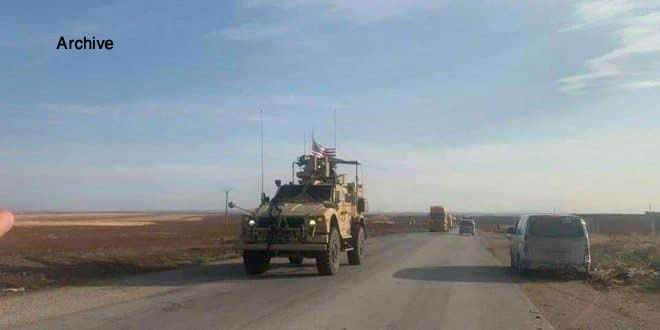 Hasaka, SANA-The US occupation forces on Thursday brought in a convoy loaded with materials, logistic equipment and supplies, as one of their military planes dropped 3 containers inside their illegitimate base in al-Shaddadi, south of Hasaka to support their forces in the Syrian al-Jazeera.

The reporter also quoted civil sources as saying that a plane affiliated to the US occupation forces dropped 3 containers over their base in al-Shaddadi city of before heading for al-Omar oil field in Deir Ezzor eastern countryside.

2021-06-24
Mhamad
Share
Previous Mikdad: General Assembly vote in favor of Havana request a great diplomatic victory
Next Mashqita town in Lattakia countryside… one of the most popular tourist destinations