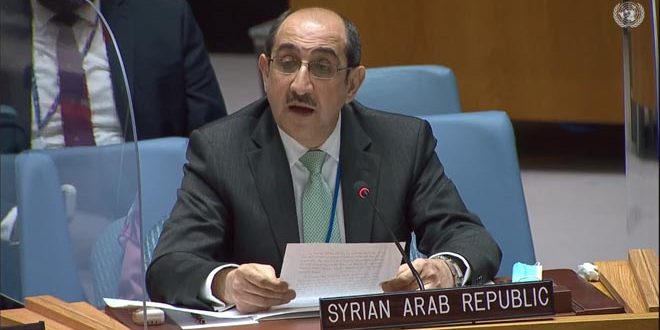 New York, SANA- Syria’s Permanent Representative to the United Nations, Bassam Sabbagh, has affirmed that the improvement of the humanitarian situation in Syria requires the immediate lifting of the unilateral coercive measures that were imposed on it, the end of plundering its resources and national wealth and stopping the politicization of humanitarian action.

During a Security Council session dedicated to discussing the situation in Syria, Sabbagh highlighted the need to support the efforts of state institutions to alleviate the suffering and provide assistance and services to the Syrians, including the support to the development goals and the rehabilitation of the damaged infrastructure to facilitate a safe, dignified and voluntary return of the displaced and refugees, in addition to supporting their efforts in the fight against terrorism and eliminating the threat of terrorism and ending the illegitimate military presence on Syrian territory.

Sabbagh noted that statements by some countries during the session show that they are still exploiting the Security Council as a platform to politicize the humanitarian action in Syria, practice political hypocrisy, and promote a deceptive approach that diverts discussions from their main topic with the aim of prolonging the humanitarian crisis in Syria.

“The Western countries insist once again that extending the so-called ‘cross-border aid delivery mechanism’ would improve the humanitarian situation in Syria, but this is a shortsighted vision that reflects extreme selectivity and discrimination against the Syrians, and hides the facts and the fundamental reasons for the decline of the humanitarian situation in Syria, among which the crimes of occupation, aggression and terrorism, including economic terrorism represented by unilateral coercive measures ”, said the diplomat.

He reiterated Syria’s rejection of this politicized mechanism, saying that it was a temporary exceptional measure whose reasons and the circumstances that motivated its adoption no longer exist.

He noted that the practical application of this mechanism confirmed all that Syria warned of regarding the grave violations that dominate the work of that mechanism in terms of violating Syria’s sovereignty and serving the interests of the Turkish occupation, and the terrorist organizations affiliated with it, on top of which is “Hayat Tahrir al-Sham, formerly Jabhat al-Nusra,” which controls Idleb and its

The fundamental flaws in the mechanism related to the lack of coordination with the Syrian government and the transparency of the procedures and mechanisms of control and distribution or the final destination of the aid, most of which ends up in the hands of terrorist organizations that use it to finance their criminal activities, win loyalties and recruit terrorists, the Syrian diplomat said.

Syria’s Permanent Representative to the United Nations stressed that what the representatives of Western countries claim of humanitarian concern for the Syrian people contradicts the procedures of their countries by imposing destructive unilateral coercive measures that cause human suffering as a result of severe shortages of food, medicines, medical equipment, water and basic services, in addition to their negative impact on humanitarian aid delivery operations.

Sabbagh said that what is deeply deplorable is the report of the Secretariat General which praises the Turkish side, while the practices of the Turkish regime were and still are one of the most important and most dangerous causes of the crisis in Syria, as its forces occupy lands in the north and northwest of Syria and commit crimes against humanity against its people, including the use of water as a weapon against civilians, as it continues to deprive more than a million citizens of Hasaka province and its countryside of drinking water by cutting water for the 24th time from Alouk station.

Sabbagh added that the Turkish regime continues to violate the bilateral agreements concluded with Syria and the relevant international treaties by reducing the flow rate of the Euphrates River, which has seriously damaged the water reserves in Syria and the supply of potable water and irrigation water for agriculture as a result of stopping the hydroelectric generation groups in Tishreen and Tabqah dams.

Sabbagh pointed out that the crimes of the Turkish occupation and its terrorist organizations has not stopped there, but rather it threatens the future of Syrian students by depriving them of continuing their education.

Sabbagh indicated that the main and influential part of the United Nations humanitarian and relief work in Syria was and is still being carried out from inside Syrian territory in coordination and cooperation between the Syrian government and humanitarian partners, pointing out that this mechanism is the best and most consistent with international law and the simplest of what it means of respecting the principle of Syria’s sovereignty, unity and territorial integrity which is confirmed by all relevant United Nations resolutions. 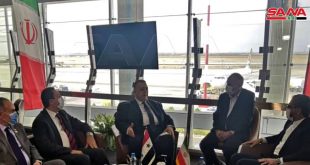