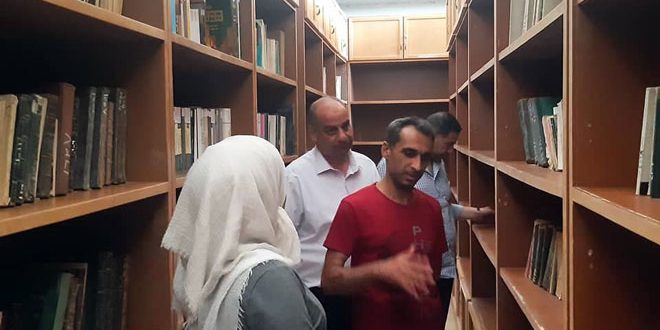 Damascus Countryside, SANA- Palace of Culture Library in Douma city is recovering from terrorism, so that it can return to what it was before as a source of inspiration for students and researchers who have been flocking to it from all over the city for more than half a century. The librarian, Zainab Haidar, said in a statement to SANA that the library contained 26,000 books by Syrian, Arab and foreign authors in scientific, literary, religious and artistic disciplines, as well as 7,000 titles in the children’s library with the Library reading room can accommodate up to 80 readers at the same time which turned into rubble due to criminal acts of terrorists.

Haider adds that a volunteer team named “Douma Youth Cultural Team” included 10 young men and women who worked with us on cleaning work, removing rubble and backfilling, and sorting the remaining publications according to topics and general number, pointing out that losses are estimated at about 30 % of the library’s contents, especially religious books.

She added that the civil society in the city of Douma played a key role in rehabilitating this cultural edifice to take up its role in the reconstruction process.

For her part, Head of the library Reem Ataya indicated that the restoration works also includes rehabilitating the building wall, closing the tunnels dug by terrorists, especially in the theater and the amphitheater, and other rooms to implement a series of lectures, seminars and technical courses, in addition to painting street opposite the building and decorating it with drawings paving the way for the return of the Directorate of Culture to the city.