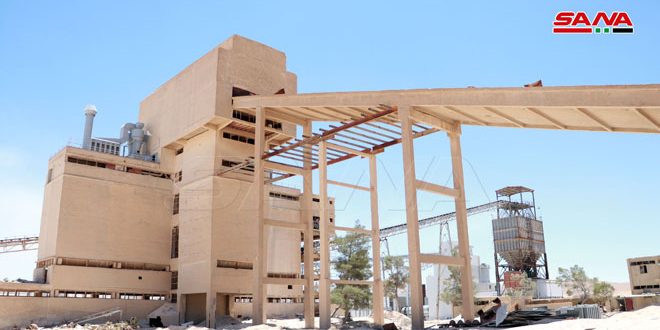 Homs, SANA-With national efforts and expertise , cadres of the Ministry of Petroleum and Mineral Resources have rehabilitated the phosphate drying plant in Khneifis mines in Badiya (desert) of Tadmour (Palmyra). The phosphate drying plant has resumed production experimentally with a production capacity of 650,000 tons a year.

The plant includes a concentration unit and two dryers for drying phosphate, and warehouses for storing phosphate and a special weighted loading unit in which the train is loaded with phosphate to be transported to Tartous port with a production capacity of 5,000 tons a day.

Minister of Petroleum and Mineral Resources Bassam Touma inspected the rehabilitation of the phosphate factory in Tadmour , which have been sabotaged by the terrorists.

The director general of General Corporation for Geology and Mineral Resources, Sameer al-Assad said that the work is underway to expand the productive capacity up to 850,000 a year. He added that the phosphate is being invested from two surface mines , al-sharkiyah and Khneifis , 45km and 65 km respectively southwestern of Tadmour city with a production capacity of 3.5 million tons a year of both mines  ,which can be exported, as a limited part of it is used internally in the manufacture of phosphate fertilizers in Homs Fertilizer Factory and the largest part of it is exported to several countries via the railway that connects the mines to Tartous port.

He hailed the workers’ efforts in rehabilitation the plant who proved that they are able to rebuild what had been destroyed by terrorism despite the economic blockade , especially that amount of destruction in the plant was massive. 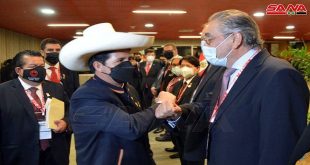 Lima, SANA- On behalf of President Bashar al-Assad and the government of the Syrian Arab …