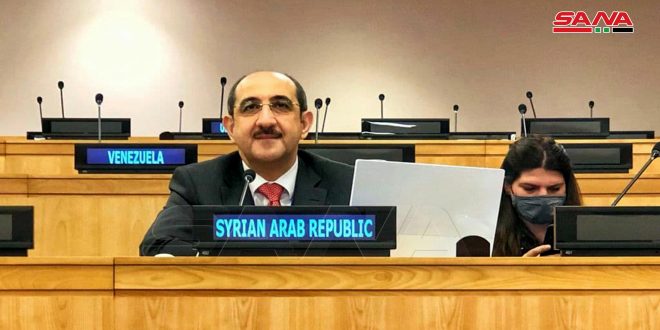 New York, SANA- The United Nations Special Committee on the Situation with Regard to the Implementation of the Declaration on the Granting of Independence to Colonial Countries and Peoples has elected by acclamation Syria’s Permanent Representative to the United Nations Bassam Sabbagh as its rapporteur.

This came during the official meeting held by the committee, also known as the Special Committee on Decolonization, on Monday morning.

In a speech addressing the committee after his election, Sabbagh expressed his thanks and appreciation for the confidence granted to him by members of the committee, stressing Syria’s support for the efforts of the Special Committee on Decolonization which works to ensure that peoples enjoy their right to independence and self-determination.

It is noteworthy that the Committee was established under a resolution of the General Assembly of the United Nations on the 27th of November 1961 and is responsible for considering and submitting proposals and recommendations related to the implementation of the Declaration on Granting Independence to Colonial Countries and Peoples.