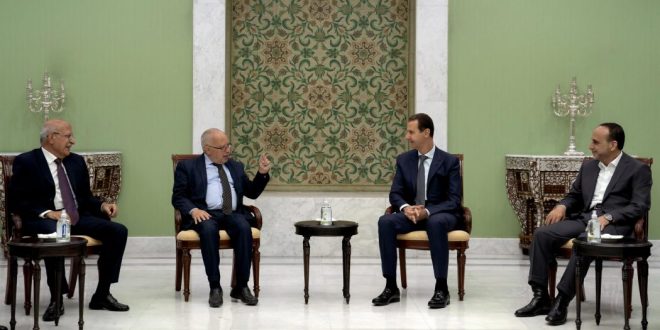 Damascus, SANA- President Bashar al-Assad on Monday received a delegation from the Islamic National Conference which comprises heads of parties, representatives, political and syndicate figures from a number of Arab and Islamic countries.

Talks during the meeting dealt with nationalism concept, identity and belonging. The talks affirmed that the events which have lately taken place in Gaza and the victory achieved there, the uprising of the Palestinian people and the interaction of the Arab people , all proved that the Arab people are still adhering to their ideology, identity and belonging despite all the plots that were hatched and circulated in the Arab region under various names.

Discussions also tackled the importance of addressing the youth, and the need to revive the language through which the concept of Nationalism is presented to the younger generations.

President al-Assad considered that the concept of Nationalism in its basic and essential meaning is an idea of belonging, adding that this concept should not be presented in an abstract ideological or theoretical framework, rather it should be based on facts; and linkage should be done between the principled and ideological ideas from one hand , and the interests of the peoples on the other.

President al-Assad went on to say that Arab intellectual elites face the challenge of convincing the people that there is a direct relation between belonging and interest , and that the status of division, isolation or sectarianism; if they took place in an Arab country , they would move to the other countries , and therefore “we cannot look at the Arab countries except as one pan-Arab arena.”

Members of the visiting delegation, for their part,  affirmed that resilience of the Syrian people in the face of all events to which they have been exposed, during the past years, has reconsidered the Nationalism project, adding that “Syria has paid and is still paying the price of  its nationalist stances and its support for the resistance.”

They considered that all Arab and Islamic peoples and free forces in the world should stand by Syria as defending Syria  is a defense for destiny and future.

Members of the delegation also congratulated the Syrian people on the success of the presidential election, considering that this constitutional process reflected the spirit of challenge through which they were able to withstand and prove that the terrorist and economic war to which they were exposed has failed to break their free will and independent decision.