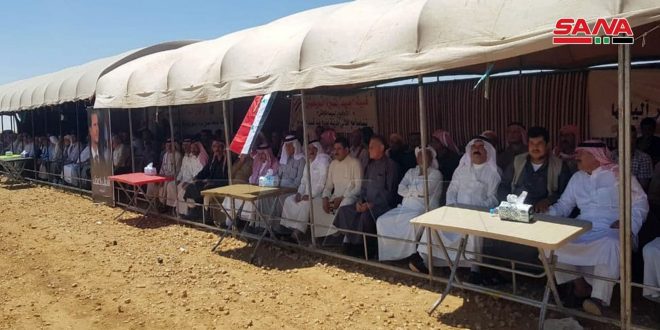 Aleppo, SANA- Syrian clans , tribes, and national elites in Aleppo province have affirmed their support to the uprising of the locals in Manbej city against the criminal practices of QSD militia and their rejection of the US and Turkish occupation forces.

Syrian clans, tribes, national elites said in statement issued during a gathering staged at al-Taiha corridor in Aleppo northeastern countryside that they will enter Manbej to support the locals there if QSD militias do not leave the area.

They stressed that there is no negotiation or reconciliation with the mercenary murderers, and the martyrs’ blood will inevitably lead to the exit of QSD from Manbej.

It is noteworthy that on June 1st, four citizens were martyred and scores were injured in targeting Manbej city by the US backed-QSD militia, in addition to targeting other neighboring villages, which have been witnessing daily demonstrations that denounce the criminal practices of QSD militia.