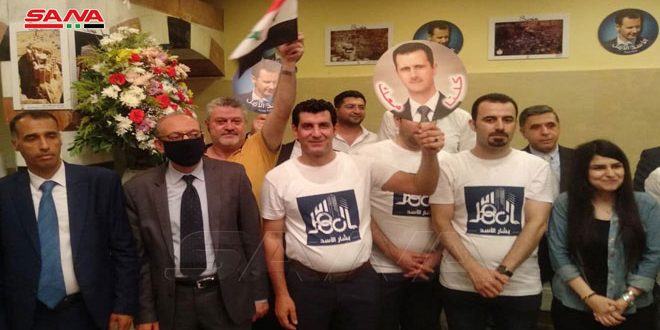 Capitals, SANA-The Syrian communities in a number of countries around the world continued their celebrations on fulfilling the presidential election entitlement with the winning of Dr. Bashar al-Assad, noting to the wide participation of Syrians inside and outside the country. In the Egyptian capital of Cairo, the Syrian Embassy held a celebration on the winning of President al-Assad in the election, in the presence of the diplomatic mission and members of the Syrian community and the National Union of Syrian Students in Egypt.

Participants in the celebration renewed their support to their country and behind their leadership, adding that they “are soldiers in the battle to rebuild Syria and raise its flag at all international forums.”

They expressed joy for the victory embodied in the electoral entitlement and the winning of President al-Assad.

Meanwhile, the Syrian community in Spain expressed their joy in fulfilling the constitutional entitlement and the winning of Dr. Bashar al-Assad in the presidential election. ” Despite all the conspiracies against the Syrian people, the electoral process was accomplished, and this constitutes a victory for the Syrian Arab people who fulfilled their electoral duty as the result has dealt a severe blow to enemies of the nation,” members of the community said.

In Bulgaria, the Bulgarian National Civil Initiative against the war on Syria and Iran, indicated that Syria has once again presented a model for all humanity about the way to defend the homeland, pointing out that the wide participation of Syrians in the election is an example to be followed not only for all European countries, but for the whole world as well.