Locals in Douma: Elections scene in our city brings back the victory over terrorism 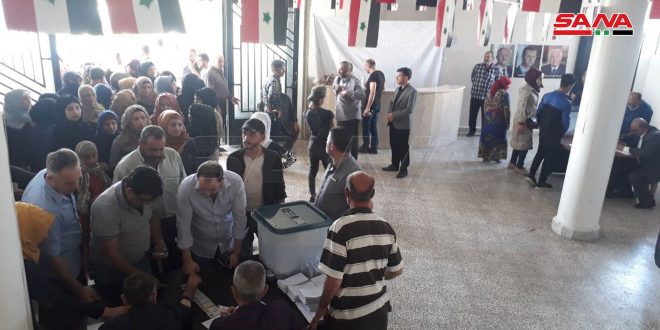 Damascus, SANA- We missed this joy for years because of the black terrorism that targeted Douma city, Hayat al-Rhaibani said, who chose to cast her vote in the presidential elections in the first hour of opening the ballot boxes to join her work as a nurse at one of the hospitals.

After casting her vote at the polling station at the municipality building al-Rhaibani told SANA that she came early to vote and enjoy her right to choose the president of her country. SANA reporter stated that the voters’ crowds have increased gradually from the first moments of starting voting, as Head of the polling station, Ayman Mahdar, affirmed that citizens have flocked since 07:00 a.m. to exercise their electoral right and there is a good turnout, confirming that the election process is going smoothly.

2021-05-26
nisreen
Share
Previous Locals in Sheikh Badr City in Tartous gather to cast their votes in presidential election
Next Higher Judicial Committee for Elections: Large turnout on polling stations in the provinces