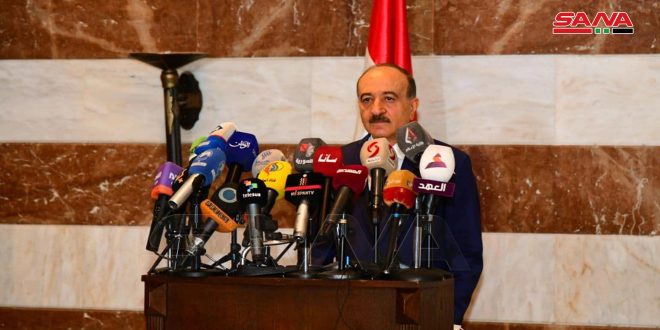 Damascus, SANA-Interior Minister Maj. Gen. Mohammad Khaled al-Rahmoun announced in a press conference on Tuesday that all logistic preparations and measures needed for electoral process for constitutional entitlement represented by the elections of President of the Syrian Arab Republic were completed.

Maj. Gen. al-Rahmoun said that “12,102 polling stations were established in all the Syrian cities and areas.”

In the framework the preparations for the presidential elections scheduled to be held on Wednesday, the Ministry has completed all the preparations and measures needed for the electoral process, including preparations of the polling stations and ballot boxes in all the provinces and registering the number of the citizens who are eligible to vote.

He pointed out that according to the Article 4 of the General Elections Law no. 5 for the year 2014, every Syrian citizen who is above 18 years of age has the right to participate in voting or referendum unless he is deprived of this right or suspended of it according to the provisions of this law, the Minister said.