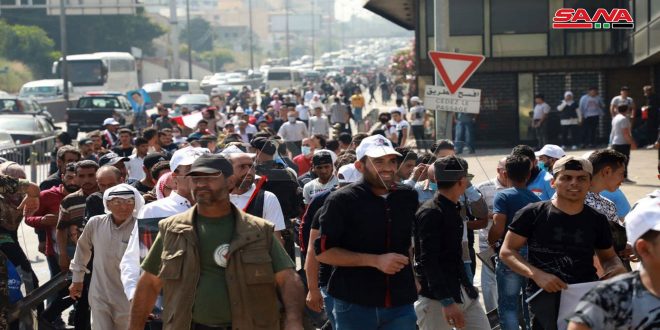 Beirut, SANA – Syrian citizens residing in Lebanon headed to the headquarters of the Syrian Embassy in Beirut to cast their votes in the presidential elections of the Syrian Arab Republic.

In a statement to SANA correspondent in Beirut, Syria’s Ambassador to Lebanon Ali Abdul-Karim, said that members of the Syrian community in Lebanon began this morning to arrive at the embassy to cast their votes in the presidential elections, as it is considered as a constitutional right and duty.

Ambassador Abdul-Karim considered that the Syrians participation in the presidential elections is a message of love from the community’s members to their country and to the world on the necessity of lifting the unjust blockade on Syria and to some countries to reconsider their faults against Syrian which is an example of coexistence in the East and perhaps in the world.

A number of Syrian citizens residing in Lebanon affirmed that they are practicing their constitutional right and their national duty, expressing their desire to return to their homeland and contribute to the reconstruction of what has been destroyed by terrorism.

2021-05-20
bushra
Share
Previous Comprehensive strike in Umm al-Fahm in Palestinian territories occupied in 1948
Next Syrians Abroad start to cast their votes in the Presidential elections in a number of Arab and Foreign countries, (Photos)