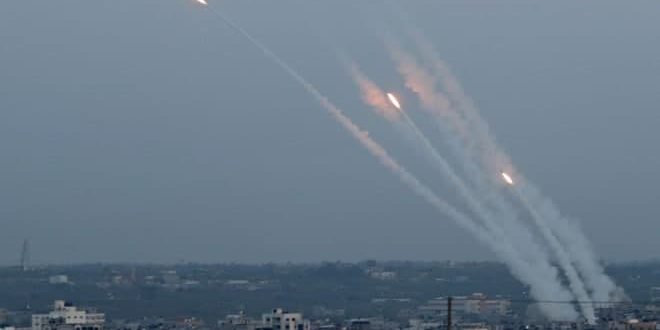 Occupied Jerusalem, SANA- In response to the ongoing Israeli occupation crimes against the Palestinian people, the Palestinian resistance on Tuesday targeted with missiles the Israeli settlements established on Palestinian lands in the vicinity of the besieged Gaza Strip and in the cities of Ashdod and Ashkelon in the Palestinian territories occupied in 1948.

Palestinian Media reported that the Resistance fired bursts of rockets from the Gaza Strip, targeting occupation settlements in the vicinity of the Strip and in the cities of Ashdod and Ashkelon in the occupied Palestinian territories in 19480.

Earlier, the Resistance targeted with a number of missiles the occupation settlements on the Palestinian lands in the vicinity of the strip and Ashkelon in the Occupied Palestinian Lands in 1948, injuring a number of the settlers.

27 Palestinians martyred, including a woman and 9 children, and hundreds have been injured as a result of the continuous Israeli attacks on the besieged Gaza Strip.

Hundreds of Palestinians have also been injured as a result of the occupation forces and settlers’ attacks on Palestinians in occupied Jerusalem and the rest of the cities and towns of the West Bank.