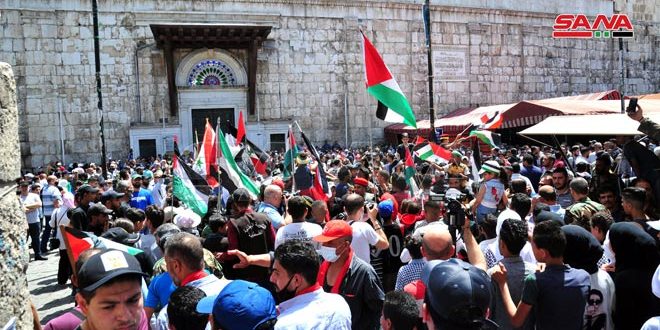 Damascus, SANA-Under the title “Jerusalem is closer”, a march to commemorate the International Quds Day set off in Damascus on Friday from entrance of al -Hamidiyah Souq towards the Umayyad Mosque, with widespread popular participation.

The march was followed by a central festival that included several speeches on that occasion and a final statement for the participants in the presence of leaders of Syrian and Palestinian parties, figures and a number of representatives of diplomatic missions accredited in Damascus. Participants in the event stressed in a statement recited by General Director of Al-Quds International Institution, Syria branch, Khalaf al-Miftah, that there is no alternative to confronting the arrogant occupation entity, but through resistance with all its forms , on top, the resistance of Palestinian people supported by the resistance forces in the region.

The participants condemned the geographic and demographic Judaizing policy practiced by the occupation entity in Al-Quds city , reiterating that consolidating al-Quds Day ceremony in our lives will make it present in the conscious of the Arab Nation that sends a strong letter to the Israeli entity that Palestine ,with its historic and eternal capital, al-Quds, will not be forgotten and will not be taken by Judaizing acts, and it will remain in the conscious of nation’s sons until it is been restored to be the capital of amity, peace and freedom. They also denounced all measures carried out by the Zionist entity in coordination with the US Administration in implementing the so called “Deal of the Century.”

The participants expressed their appreciation for Syria’s stance in backing the Palestinian cause in addition to the Iranian Islamic Republic and the axis of Resistance.

International Quds Day is observed on the last Friday of the blessed month of Ramadan every year in all parts of the world in solidarity with the Palestinian people. 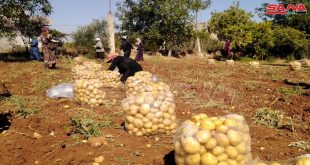