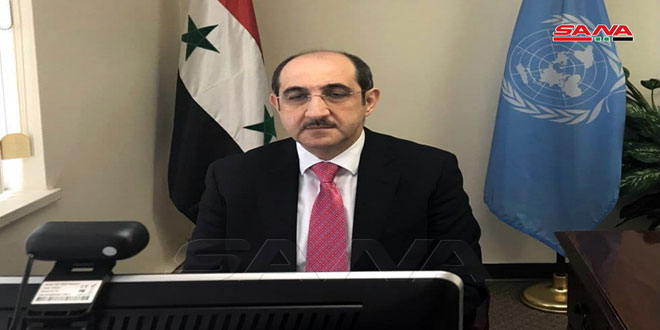 New York, SANA- Syria stressed that it has never used chemical weapons and it condemns the use of these weapons by anyone, at any time and in place, adding that the hostile decision that was passed against the country at the conference of Organization for the Prohibition of Chemical Weapons represents a bad example of the organization’s dealing with the states parties in it and its submission to the influence of Western countries.

“Organization for the Prohibition of Chemical Weapons, on the twenty-first of last month, witnessed a serious development in its work process, as the 25th session of the Conference of States Parties to the chemical weapons convention adopted a hostile resolution against Syria as a result  of blackmail and pressure exercised by the United States, France, Britain and Germany in a precedent in the history of this organization through  suspending the rights of a member state that joined it voluntarily” Syria’s permanent representative to the United Nations, Bassam Sabbagh, said during a session of the Security Council on Thursday  via video.

Sabbagh pointed out that the politicized decision is an embodiment of a false report that is full of misleading and fabricated conclusions of the so-called “Investigation and Identification Team” regarding alleged incidents of al-Lataminah in 2017.

He went on to say that it was not a coincidence that the so-called  “investigation and identification team” issued a second misleading report about the alleged Saraqeb incident only a few days before the convening of the Conference of States Parties to the CWC , in a clear indication that this team is serving its operators to help them mobilize the largest number it is possible for states to pass the French-Western decision.

He affirmed Syria’s rejection of what has been included in the report in form and content.

Sabbagh said that the illegitimate French-Western decision comes within the framework of an aggressive plan against Syria, so its authors deliberately ignored Syria’s full cooperation with the organization and directed baseless accusation against it represented by “Not yielding to comply with the agreement.”

The Syrian diplomat added that Syria thanks the countries that took the right stance and didn’t vote in favor of that politicized Western decision and  rejected all methods of pressure and blackmail that were practiced on it.