New York, SANA- Syria has affirmed that the Israeli repeated attacks against its territory, sovereignty and independence pose threat to regional stability and international peace and security, referring to the continuation of the occupation entity’s benefit from the protection umbrella provided by known governments at the UN security council.

“The occupation entity perpetrated new aggressions on Syrian territories, launching a missile air attack, on Wednesday dawn, that targeted the coastal region, causing the martyrdom of one civilian and injuring 6 others… the Israeli occupation also launched another aggression on Quneitra Countryside on May 6th” Syria’s permanent representative to the UN, Bassam Sabbagh, said in a letter addressed to UN secretary General and President of Security Council.

Sabbagh added that the two Israeli aggressions violate the international law principles, and UN relevant resolutions, particularly no. / 350/ for 1974 regarding the agreement on Disengagement.

The Syrian diplomat stressed that Syria again warns against the repercussions of the UN Security council ignorance of its responsibilities in preserving international peace and security.

He added that Syria calls on Security council to assume its responsibility in carrying out its resolutions, particularly resolutions No. 242 of 1967 and 338 for 1973 and 497 for 1981. 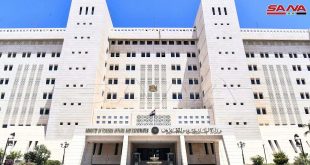 Damascus, SANA- The Syrian Arab Republic has condemned the US and Western blatant interference in …