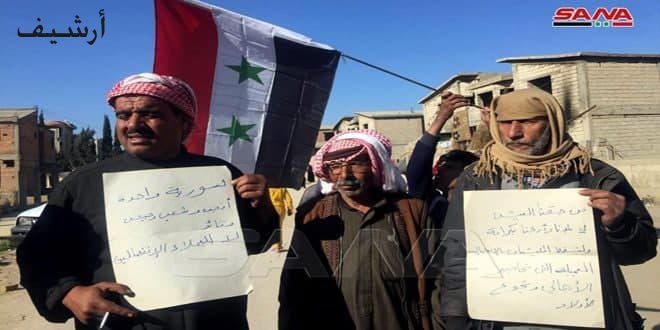 Hasaka, SANA- Al-Ubaid tribe in Syria has condemned attacks of US occupation-backed QSD militia and its criminal practices against the people in Hasaka and Qamishli cities.

In a statement of which SANA received a copy of it , al-Ubaid tribe affirmed its standing by the people in Hasaka, Qamishli and Tayy neighborhood, and confronting all forms of terrorist practices carried out by QSD militia and Asayish militia backed by the US occupation ,which siege the sons of Syrian al-Jazeera ,  kidnap  them and steal wheat and oil.

Al-Ubaid tribe underlined its support for the presidential election entitlement , as well as standing by the Syrian Arab Army to purify all Syrian soil from terrorist organizations and preserving Syria’s sovereignty and national unity.