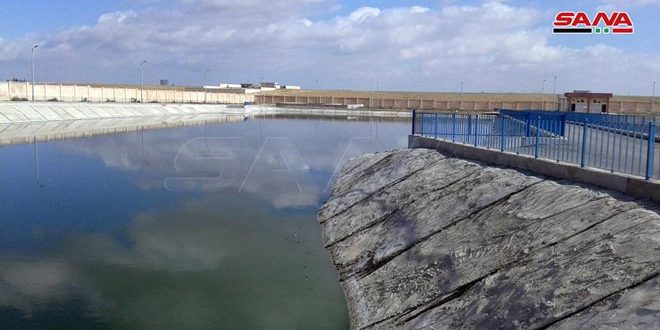 In a statement to SANA, Arnous said “the sewage treatment station was put for wastes resulting from industrial facilities and sanitation in the industrial city, which is important for the environment of this region,” referring to suspension of the project works during the past period as a result of terrorism.

For his part, Minister of Local Administration and Environment, Hussein Makhlouf, said that the importance of the project lies in the capacity of the station per day which reaches about 5,500 cubic meters, adding it is an untraditional resource for water planned to be used for the projects of the industrial city, in addition, to remove pollution from water sources.

“The area of ​​the station is about 90 dunums with a capacity that reaches 5,500 cubic meters per day,” Director of Hissya Industrial City, Bassam Mansour, told SANA.

Mansour pointed out to the importance of fulfilling the station being a vital and strategic project that contributes to preserving the environment and public health by reducing pollutants and bringing them to permissible limits according to the Syrian standard specifications that allow irrigation of forage crops, forests and green spaces.