Abdullahian: Iran will always stand by Syria and support it 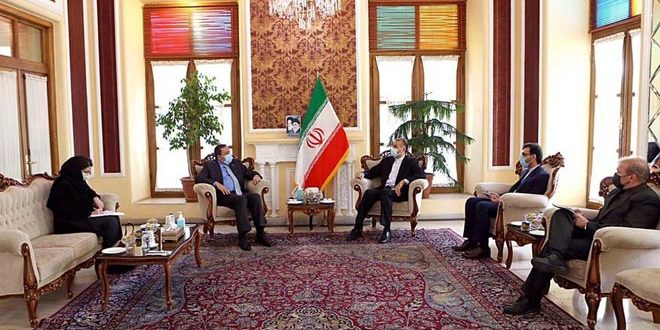 Tehran, SANA-Special Assistant to Speaker of Iran’s Shura Council, Hussein Amir Abdullahian, affirmed on Thursday that Syria has been and still in the front line of the axis of resistance, stressing that Iran will always stand by Syria and will continue its full support for the Syrian people and their leadership.

“The US is still practicing its terrorism and imposing economic sanctions, and it is now waging an economic terrorist war against Syria with economic terrorism tools under the title of Caesar Act,” Abdullahian said during a meeting with Syria’s Ambassador in Tehran, Shafiq Dayoub .

He condemned Washington’s unconstructive policy in the region and the world.

Abdullahian hailed the deeply-rooted, friendly and fraternal relations between Iran and Syria, considering the visit of the parliamentary friendship groups and the specialized committees in the two countries as an important factor to increase and strengthen cooperation between them.

For his part, Ambassador Dayoub stressed that Syria will continue to cooperate with its allies and friends in the war against terrorism until defeating it and liberating every inch of its soil.

He reaffirmed that Syria stands firmly by Iran and fully supports negotiations to revive the nuclear agreement and lift the unilateral and illegal sanctions imposed on it.