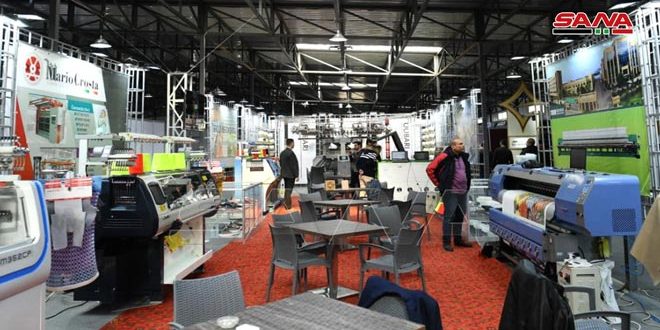 Aleppo , SANA- Activities of the 3rd Aleppo International Fair opened on Thursday at the Sports City in Hamdania with the participation of 400 companies and a local, Arab and foreign companies, which included various products for engineering, chemical and food industries.

Industry Minister, Ziad Sabbagh, said the Fair reflects Aleppo’s return to its industrial glory and re-running of the production wheel, the recovery of the Syrian industry and its ability to stand again despite all the difficulties and challenges of the blockade and its natural position on the global economic map. For his part, Aleppo International Exhibition Director Ali Nizam referred to the importance of the exhibition in highlighting the products of the Syrian industrialist and merchant who have proven their ability to withstand, overcome difficulties and keep pace with development in various fields.

He referred to the diversity of the production of the participant pavilions of engineering, metallic, and electrical industries, cars, foodstuffs, clothing and textiles which indicate the recovery of the national industry in addition to the participation of a delegation from brotherly Iraq. A number of Iraqi businessmen and merchants, who visited the Fair pointed out to its importance in getting acquainted with the Syrian products, as Khudhair Al Shammari, Chairman of the Diwaniyah Contractors Federation, indicated to his keenness to participate in the exhibition and visit it as an embodiment of the strong and historical relations between Iraq and Syria, as well as learning about what is new in the Syrian industry and benefiting from it in the reconstruction of Iraq.