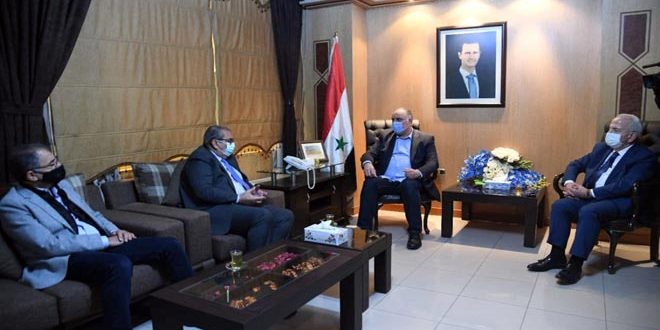 Damascus, SANA-Minister of Internal Trade and Consumer Protection Talal al-Barazi has discussed with a delegation of the Jordanian Chamber of Commerce, headed by Nael Kabariti, means to activate the economic cooperation and trade exchange between the two countries.

Minister al-Barazi affirmed Syria’s readiness to provide all forms of support and facilitations necessary to revitalize the movement of economic cooperation and trade exchange, especially the transit trade, because of its vital role in stimulating the flow of goods between the two countries and the markets of other countries.

He underlined the importance of exchanging visits between businessmen and members of chambers of commerce in the two countries and organizing exhibitions and festivals for shopping and carrying out investment projects.
For his part, Kabariti stressed keenness of the Jordanian side on activating the trade exchange with Syria and facilitating the flow of goods to the markets of the two countries, in addition to removing all obstacles and problems which hinder this.

He expressed hope that the next meeting of the Arab Chambers of Commerce will be held in Syria.