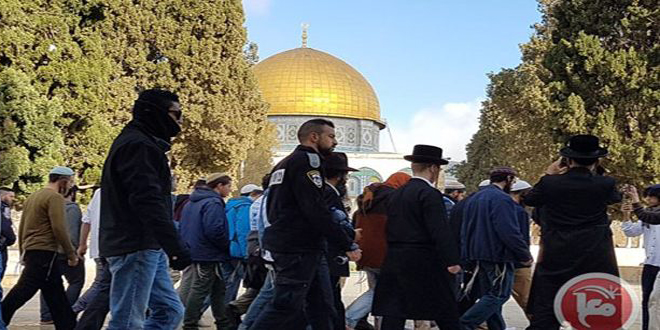 Occupied Jerusalem, SANA-Tens of Israeli settlers on Monday stormed into al-Aqsa Mosque once again under the protection of the Israeli occupation forces.

Palestinian Wafa News Agency said that 89 Israeli settlers stormed into al-Aqsa Mosque from the direction of al-Maghariba gate, and they carried out provocative tours in its yards under a tight guard by the occupation’s forces.

2021-02-22
shaza AL ASHKAR
Share
Previous A child dies due to lack of health care in al-Houl camp, east of Hasaka
Next Mikdad: Human Rights Council should put grave violations, resulted by coercive measures, on top of its priorities

Damascus, SANA- Israeli occupation troops arrested on Wednesday a Palestinian in the city of Hebron …