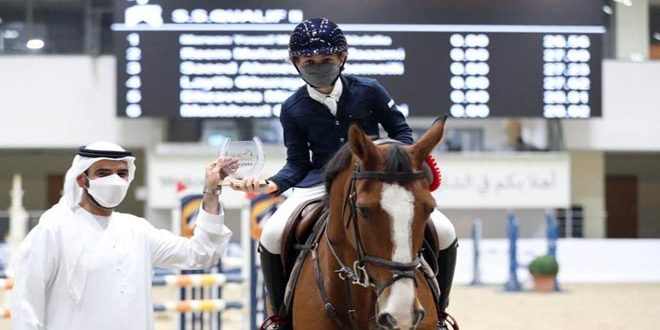 Abu Dhabi, SANA- Syrian Equestrian has regained its brilliance in the international championships of the horse show jumping after cutout from foreign participation last year due to the Coronavirus pandemic, which has affected sport around the world. In the 135cm barriers height category competition, which was held on one-round specification with a round differentiation, as knight Amro Hamsho ranked third in a time of 31.75sec.

Hamsho was also ranked third also in the final championship and its course is designed with hit barriers height 145 cm, in a time of 76.31sec. with participation of 54 knights.

In the two-star Fatima Bint Mubarak International Academy Show Jumping Cup, horse rider Shadi Gharib won the cup of the first tournament as the height of its barriers reached 130 cm. while in the second game in which the hurdles reached 115cm , Knight Laith Gharib won the cup of the tournament  and Aya  Hamsho won the “Champion126” prize with the First Place, after completing the differentiation in a time of 32.62sec.