Western coercive measures won’t achieve what terrorism has failed to do against Syria, Endler says

Prague, SANA-Philip Endler, a Czech writer said that the economic and social situations witnessed in Syria are a direct result of the coercive economic measures imposed by the US and the West on the Syrian people whose livelihood has been gravely affected by those measures.

In an analysis posted on one of the electronic Websites, Endler said that the Syrian Arab Army has achieved remarkable victories in its war against terrorist organizations and their backers of the regional and Western countries.

He added that despite all the Syrian Army victories, the West still denies the defeat of its terrorist tools and the failure of its schemes against Syria, and it seeks to starve the Syrians through the unilateral coercive measures.

Endler affirmed that those measures will not achieve the schemes of the West, or even what the terrorists have not be able to do in Syria, as the only consequence is causing the suffering of the Syrians. 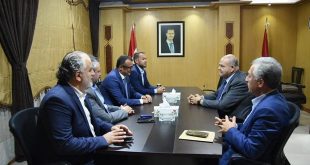